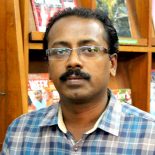 Connecting people through Books and Reading

Twenty-first century school libraries are designed as social spaces where students meet, share, and collaborate. Besides fulfilling the prime objective of supporting classroom teaching and learning, libraries now position themselves as links which connect young learners with the larger society. The social and personal values imbibed by students through such activities in their formative ages will strengthen their character and help them to become responsible citizens. It is with this aim that an initiative called ‘Gift a Book and Get a Friend‘ (henceforth GBGF) was started by Kendriya Vidyalaya (KV), Pattom, in 2013. Under GBGF, a school from the neighbourhood with relatively less infrastructure and academic record is selected to partner with KV. The students of both schools are then encouraged to become friends through sharing books, telling stories, and collaboratively developing a library.

Kendriya Vidyalaya at Pattom, a suburb of Thiruvananthapuram city, has built a vibrant reading culture among its users over the past decade through a number of innovative practices. These include an award-winning online academic social network (Library Junction), summer reading and peer-to-peer reading programmes, and information & digital literacy initiatives (InfoLitIndia and Infobreak). The school has a well-planned and effectively implemented library programme with an Annual Library Activity Plan and Readers’ Club. Since 2008, the library has been at the forefront in integrating social media and online resources into its core services in order to reach out to new-generation learners.

GBGF is a programme under the social responsibility initiative ‘Library-Social Connect’. Rather than giving a financial contribution or donation, the school plans a long-term relationship by forging friendships through the mutual love for books. In addition to helping children in schools that lack a well-stocked library get access to the world of literature, the programme also sensitises students to social realities beyond the school walls. The first edition of the programme was held at Government Upper Primary School, Palkulangara on December 6, 2013. More than 450 new and used books of good quality were collected from the students and staff of KV Pattom. The books were in English and Malayalam. All students of the partnering school were gifted with book packets and a separate set of books was donated to enrich the existing school library collection.

Ms. Rakshanya Sekar, one of the participants of this first edition of the programme, still remembers the event vividly:

‘When we arrived at U. P. S. Palkulangara, there was so much excitement in the air. After the formal inauguration and handing over the boxes of books we had collected from our school, we went on to handing over books one-to-one, wrapped as gifts from us to them, in turn gaining a new friend. It was wonderful to see the initiative of the library come to realization. Followed by cultural programs and a lot of gift exchanges, we all remember sitting down in a group talking to the kids from the school, getting to know them, sharing our stories, even munching on bites provided to us by the school. It is such a fond memory’.

Mr. Anil Kumar, Headmaster of Palkulangara Government UPS, saw it as a rare opportunity to collaborate with one of the biggest schools in the state. His school, which was termed ‘uneconomic’ by the State Education Department at the time, could enrich its library collection and regain public interest through hosting the initiative.

Since then, the programme has been organized annually with a new school, with several government schools in Thiruvananthapuram benefiting from the partnership over the years. The initiative has so far helped to connect more than 1000 children and share over 4000 books. 1

Before every edition of GBGF, there is a call for donations, publicity for the event, and the collection and packing of materials. The event is usually hosted in the partnering school. It begins with an inauguration attended by the Principals, teachers and parent representatives of both schools, along with local government representatives. Cultural performances jointly presented by the students of both schools add colour to the occasion. Besides books, the students are gifted sweets, writing materials, cards and toys. This is followed by a short tour of the campus, where KV students are taken around by the students of the partnering school. This encourages free and open interaction among students, teachers and other staff members. Finally, the students together help reorganize the partnering school’s library and stock it with the donated books. These activities help students of both schools create personal connections and become more confident in confronting social realities beyond their comfort zones. It helps to develop qualities like mutual respect, sharing, compassion, and love. The relationship with the partnering school is sustained through more collaborative initiatives such as the sharing of resources, teacher-exchange programmes and resource development for the school library.

Given its effectiveness in opening up avenues for developing educational facilities through partnerships, the ‘Gift a Book and Get a Friend’ programme is now being replicated in many schools across the country. In 2017, Kendriya Vidyalaya Sangathan began a new programme under which all KVs around the country have to partner with a nearby Government school to share best practices and resources for ensuring excellence in pursuit of scholastic and co-scholastic activities. KV Pattom selected Government High School Mannanthala as its partner, the school where the fourth edition of GBGF was held. The areas of collaboration include the sharing of best classroom teaching practices, library resources, science labs, e-classrooms, ATAL Tinkering Lab and resource room facilities as well as the organization of inter-school sports and game events. The bonds created through the programme are still kept strong through a number of planned activities. The feedback from the Government High School of Mannanthala affirmed that the partnership strengthened its stature as a live and active school and helps them to gain more new students every year. GBGF, therefore, serves as an effective and replicable model for educational development.

Author’s note: This article is a modified and updated version of the following report:
Faisal, S. L. ‘Gift a Book and Get a Friend: Creating Connections through Sharing Books’. Focus on International Library and Information Work 49, no. 2 (2018): 46-51.

About the Author: S. L. Faisal works as a librarian at Kendriya Vidyalaya Pattom, Thiruvananthapuram. He is a recipient of IASL International School Librarianship Award, NCERT & KVS National Innovation & Experimentation Awards and the National ICT Award for Teachers. Currently, he is pursuing PhD in Library and Information Science.

This article was originally published on ALA (അല) A Kerala Studies Blog. FEBRUARY 28, 2019  ISSUE 6

This entry was posted on March 3, 2019 by slfaisal in Random notes.